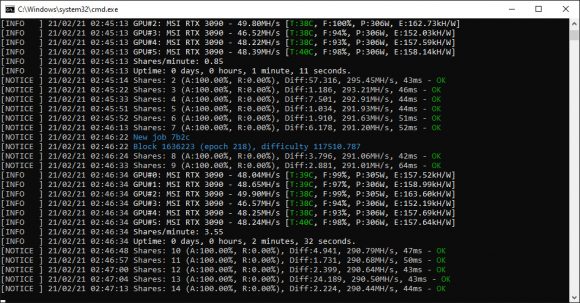 Last year Ravencoin (RVN) has successfully hardforked and switched to KAWPOW as a mining algorithm from the previously used X16Rv2 algo. The latest Z-Enemy 2.6.3 Beta version that was recently made available is an important update for everyone that has Nvidia GeForce RTX 30 Series of GPUs and uses them for crypto mining. This is a TEST BUILD of the software that adds support for Nvidia RTX 30×0 video cards with CUDA 11.1 and drivers ver. 456.81 or later. It is intended for RTX 3060 Ti, RTX 3070, RTX 3080 and RTX 3090 GPUs, if you have an older Nvidia GPU you should use the latest stable release Z-Enemy 2.6.2 instead. This official and not beta version works on CUDA 9.x and CUDA 10.x and it is recommended to make sure you’ve updated your NVIDIA video drivers to at least version 398 or a newer one.

The KAWPOW algorithm used by Ravencoin is a derivative of ProgPOW with parameters specific for RVN, so performance wise you can expect similar hashrate to what ProgPOW delivers. ProgPOW or Programmatic Proof-of-Work was designed in a way that it utilizes graphics processors to their maximum in order to provide an equal level performance without favoring a specific GPU manufacturer or being able to actually provide much faster hashrate if implemented on ASICs. The ProgPOW algorithm was made as a kind of evolution of the Ethash algorithm used by Ethereum and at some point ProgPOW was even considered as a replacement algorithm for Ethash for Ethereum. The idea here is that a cheaper GPU with better video memory will not perform better like in some cases for Ethereum, but instead the performance you get will be based on the overall GPU performance level – both of the GPU and the VRAM.

KAWPOW was based off ProgPOW as a means to drive away any FPGA and/or ASIC mining hardware that was starting to become available on the Ravencoin’s network and the fork was successful in doing so, but it took a bit of time for things to start moving again for RVN. The last few days we are finally seeing that things are moving with Ravencoin price seriously on the move and thus the interest in mining Ravencoin is peaking once again. Mining RVN has also become quite profitable due to the increase in the price of the coin, so people are considering switching some of their GPU mining power to mine RVN as profitability gets closer to that of Ethereum mining.

The KAWPOW mining algorithm uses both GPU and memory, so overclocking both can help you maximize performance, though you should start without overclock and see what your mining hardware can handle. This can however increase the power usage and operating temperatures for achieving optimal performance when mining RVN on the same hardware as opposed to mining ETH with optimal performance! Do note that KAWPOW and PROGPOW use DAGs like Ethash and currently the DAG size of Ravencoin (RVN) is at almost 3GB, so GPUs with 4GB as a minimum for mining will be required. Just as a reference, a single Nvidia GeForce RTX 3090 with settings optimized for 120 MH/s Ethereum mining can do almost 50 MH/s hashrate for KOWPOW mining. Also be advised that the GDDR6X memory temperatures on RTX 3080 and RTX 3090 while mining RVN are much lower compared to when mining ETH, so this may be an advantage especially for people that have trouble with the memory chips running too hot while mining Ethereum.

How to see rejected shares on phoenix miner?