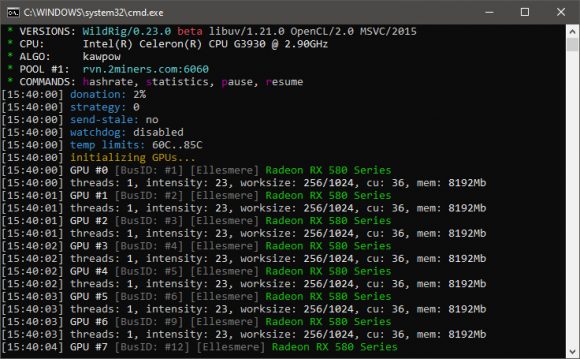 The latest WildRig Multi 0.23.0 Beta AMD GPU miner has added support for the the KAWPOW algorithm now used by RavenCoin (RVN) as well as ProgPoW used by Super Zero (SERO). The latest release also adds --benchmark option for ProgPoW algorithms (including KAWPOW) as well as added --benchmark-epoch option for estimated hashrate benchmark results for specific upcoming epoch number. The WildRig Multi is the third option for AMD GPU miners to mine the new KAWPOW algorithm and unfortunately is currently the slowest in our tests on AMD Radeon RX 580 8GB GPUs. The fastest one for AMD GPU miners currently seems to be nanominer followed closely by NBMiner. Still you might want to test and compare performance on your AMD GPUs to see what works best out of the three options as on different AMD GPUs there cold be difference in the hashrate with each of the miners.

The latest WildRig Multi is currently available for Windows, Ubuntu Linux and HiveOS as a closed source binary and with a 2% developer fee built-in by default, though it can be lowered to 1% using --donate-level=1. Only the wildkeccak algorithm is with fixed 2% dev fee with no possibility to be changed by the user using the command line parameter.

Update: The newer version 0.23.1 does bring a bit of a performance boost, but we are also seeing a lot of low difficulty share errors with it, so probably not quite there yet to compete with the alternatives! Also a good news is that the default dev fee has been lowered to 1%, so no need to use the extra command line option to do that manually anymore.