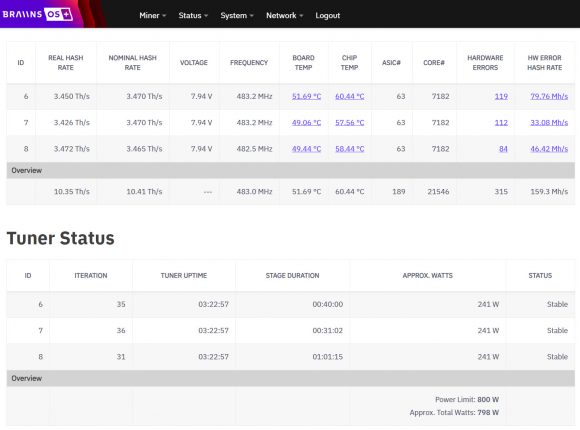 Prior to the recent Bitcoin block reward halving it was all about overclocking your old ASIC mining hardware such as the most widely used Antminer S9 SHA256 ASIC, so that they can manage to mine as much as possible before the halving. Now, a few days after the halving is a fact people are turning off their old Antminer’s as they are hardly profitable anymore, unless you have very cheap electricity or even free one. Don’t be in a hurry to throw them out just yet, this time however, instead of overclocking them, you might be actually downclocking them in order to get better power efficiency and extend their life a bit more. There are a number of modified alternative firmwares available for the Antminer S9 that allow you to get options for finer tuning for higher hashrate for better efficiency. We personally like to use the Braiins OS and more specifically the newer plus version that supports autotuning.

With Braiins OS+ autotuning feature it is really easy to get optimal results not only for higher hashrate, but for better efficiency at a lower power usage as well. We did a quick test to see how good it works and what results can we get trying to optimize power usage while retaining the best possible hashrate. So in about 3 hours we managed to get about 10.4 TH/s for 800W of power usage from a single Antminer S9. That is about 77 Watt per THS which is not bad result for just setting the 800W power target and let the firmware do the rest automatically, but going somewhere between 700W and 800W of power usage should be the sweet spot of about 75W or even a bit less per Terahash of hashate. Of course results can vary from miner to miner, can also be affected by the cooling and so on, but it won’t hurt to try. Do note however that the Braiins OS+ and the autotuning feature do come at a cost as there is a 2% built-in development fee.