The MSI GeForce RTX 3090 SUPRIM X 24G (Nvidia RTX 3090 or GA102 graphics processor) features 10496 CUDA cores with 1860 MHz Boost clock for the GPU, it has 328 TMUs and 112 ROPs, the SM count is 82, there are 328 Tensor cores and 82 RT cores. The card is equipped with 24GB GDDR6X video memory with 384-bit wide memory bus running at 1219 MHz with 19.5 Gbps effective memory speed for a whooping bandwidth of 936.2 GB/s. Normally the RTX 3090 GPUs are rated at 350W TDP and need 2x 8-Pin PCI-E power connectors, but these SUPRIM X cards have a TDP of 420W and feature 3x 8-pin PCI-E power connectors. This is important as it means that you would need 18x 8-pin PCI-E power connectors and a powerful enough power supply or actually two for that matter to make your life easier. The cooler of the video cards is massive and very effective, there is a backplate with heatpipes on the back and triple fans with dual ball-bearings to keep things cool and not very noisy even when running at 100% speeds. Keeping everything operating at low temperatures is very important when mining and especially with powerful GPUs that use a lot of power. The GeForce RTX 3090 SUPRIM X 24G is easily cooled as far as the GPU is concerned as the operating temperatures at stock settings are quite low, but the issue that needs to be addressed with RTX 3090 is also keeping the GDDR6X memory chips as cool as possible. The video memory gets hot, especially when using the card to mine Ethereum (ETH) and you can experience hashrate drops if they get too hot, not to mention that they can give you further trouble if not properly cooled while mining in the not-so-distant future.

Why use Nvidia GeForce RTX 3090 video cards for mining when they are much more expensive than Nvidia RTX 30 series GPUs and when we know that they are not going to offer us the best price/performance match for Ethereum (ETH) crypto mining. At the moment with all the GPU shortages on the markets it is you mine with what you can get and if it is RTX 3090 then it is RTX 3090. Of course, there are options that offer better price/performance ratio such as RTX 3080, RTX 3070 and even the RTX 3060 Ti, but the RTX 3080 is definitely the best choice you have, but then again it is also the hardest if not impossible to find at the moment. The runner up is the RTX 3060 Ti as it is the cheapest 30-series GPU to give you really high hashrate for Ethereum mining, but another one that is also very hard to find. So, it seems that the RTX 3090 are easier to find because of their very high price with RTX 3070 cards also more easily popping up from time to time, unlike the RTX 3080 or RTX 3060 Ti. The Nvidia GeForce RTX 3090 is definitely the fastest video card for Ethereum mining at the moment with its stock hashrate of roughly 105 MHS at default settings, but you can tweak it a bit to get up to around 120 MHS. If you manage to get your hands on RTX 3080 GPUs then do not hesitate as these are significantly cheaper and can still provide you with about 90-95 MHS hashrate with tweaked settings. 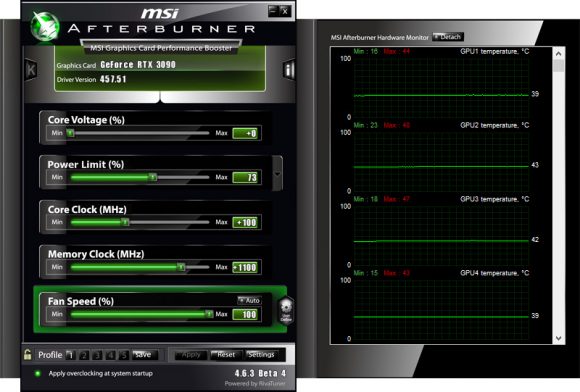 As already mentioned, the MSI GeForce RTX 3090 SUPRIM X 24G GPU is capable of giving you around 105 MHS hashrate for Ethereum mining out of the box at stock settings and that means about 400W of power usage per GPU. With a bit of tweaking, you can get better hashrate and with a lower power usage – lower electricity expenses and better cooling for long term mining operation without problems. On the RTX 3090 it is a wise idea to go for 100% speed of the cooling fans, so make sure you get GPUs with good quality ball-bearing fans (yes, there are RTX 3090 GPUs with sleeve bearings being sold by some brands!!!). We start by lowering the Power Limit level down until we see the hashrate starting to drop below the MHS we get at stock settings, in the case of the MSI RTX 3090 GPUs this happened at around 65% TDP. So, with 35% less power used we can still get 105 MHS mining Ethereum (ETH) with RTX 3090, meaning there is no reason whatsoever to waste any extra power without any additional performance. Then it is time to overclock the video memory and at some point, we may also need to bump up the TDP level with a few percent to allow more headroom due to the increased memory power consumption for the extra hashrate. The settings below for the MSI RTX 3090 SUPRIM X GPUs provide us with a hashrate of 120.9 MHS per GPU mining Ethereum or for the whole 6x GPU mining rig we get a little over 720 MHS total and that is an impressive number for a single mining rig with just six video cards in it.

With these settings PhoenixMiner reports a bit over 1800W of total power usage for the six GPUs with a little over 300W per GPU, but measuring the power consumption at the wall and taking into account the other components in the mining rig as well as the power supply efficiency the total power usage for the whole rig is more like 2100 Watts, the energy you end up paying for. This means that a single 2000W PSU such as Leadex Super Flower 2000W is not enough (we know, we tested it) with the following settings. If you drop down the Power Limit to about 65% you can manage with a single really good 2000W PSU, but it will be pushed near its limit, so not a good idea on the long term for a number of reasons. Not to mention the fact that a single even 2000W PSU does not come with enough 8-pin PCI-E power connectors and using cable splitters on such power-hungry GPUs is never a good idea as it could cause issues with the power cables or PSU connectors burning. What you need to just do is add a second less powerful PSU, so we ended up doing 4 GPUs on the 2000W Leadex and then added a second Corsair 1200W PSU for the remaining two cards. This way the mining rig can work well even at 100% TDP with full load without having trouble with the power supplies, just know to be on the safe side that even 2x 1200W power supplies might be on the edge, so consider going with a bit more powerful PSUs to be on the safe side.

Based on our experience so far, the +1100 MHz memory overclock seems to be the sweet spot for the RTX 3090 and also in general for other Nvidia GeForce RTX 30 series GPUs in terms of performance, stability and operating temperatures when using the cards to mine Ethereum. Sure, it is possible to get a bit higher operating frequency up to about +1300 MHz on some GPUs, but not all may work stable and frankly we are more concerned about the operating temperatures of the GDDR6X chips when overclocking too much. Higher operating frequency means higher temperature and more power used, not to mention that the extra boost of about 1-2 MHS you get by pushing the video memory further may not be worth the trouble. So, single MSI GeForce RTX 3090 SUPRIM X 24G video card doing 120 MHS at a little more than 300W of power used for mining Ehtereum (ETH) and a 6x GPU rug with Nvidia GeForce RTX 3090 cards doing 720 MHS in total is definitely impressive performance. The GeForce RTX 3090 GPUs are a little graphical performance monsters and that goes not only for memory intensive crypto algorithms like Ethash, but for more GPU intensive ones as well. That would of course need some more time testing and experimenting with and may need different GPU/VRAM/TDP settings for the cards in order to maximize performance in a specific algorithm…

Problem with rx 590 not starting