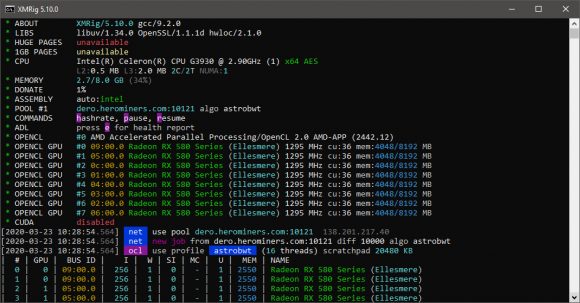 The latest release of the XMRig 5.10.0 comes with support for the AstroBWT algorithm on AMD GPUs, besides the already available CPU mining support, along with some optimizations for the algorithm used by the DERO project since a fork switching the algorithm earlier this month. another important change in the miner is that the cn/gpu algorithm is now disabled by default and will be removed in next major release (v6.x.x), as well as a major TLS (Transport Layer Security) subsystem update. As far as AMD GPU performance on the AstroBWT algorithm compared to CPU mining, an AMD Radeon RX 580 8GB does seem to produce a hashrate slower than that of a mid-range CPU. A higher-end processor such as AMD Ryzen 3900X could be as much as 4 times faster than a RX 580 GPU, so AMD GPU mining may not be that attractive for AstroBWT.