Last month we have tested the freshly released Scala (XLA) mobile phone miner for Android smartphones and were pretty impressed by what we saw. Probably the best, though definetly not the only smartphone-based crypto mining software out there, although the DefyX algorithm used by the project can also be mined with computer CPUs at a much higher hashrate. A Smartphone crypto miner such as the one being developed by XLA is giving much better power efficiency for the hashrate it produces, even if the hashrate itself is not that high. This is definitely nice, but would’ve been even nicer if the project was only from smartphones with mining done only on them similar to what MIB Coin (MIB) does, because now most miners will just go for CPU mining Scala anyway. 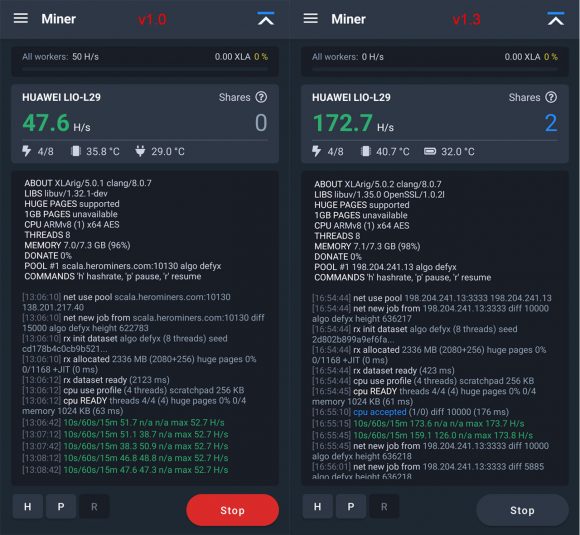 Back to the XLA Mobile Miner, there has been some improvement to the software in terms of features since the initial release with the latest version 1.3 focusing on significant performance improvement apparently. With the first version (on the left) using Huawei Mate 30 Pro smartphone to test we got around 50 H/s as hashrate utilizing 4 out of the 8 available cores. Repeating the test on the same device with the latest version 1.3 (on the right) has shown significant boost in hashrate up to about 170-180 H/s again with 8 out of 8 cores used. As with the first release going for all 8 cores to be used for mining very quickly rises the temperate of the mobile processor above 65 degrees Celsius which is not considered very safe for a smartphone. This is specifically for the high-end Huawei Mate 30 Pro, performance can vary and the usability of the number of available CPU cores can vary from device to device. If you decide to give the miner a go feel free to post your performance result and the model of the device in the comments below.

– To download and try the latest Scala Mobile Miner v1.3 for Android-based smartphones…